A universal language at the United Nations

A universal language at the United Nations 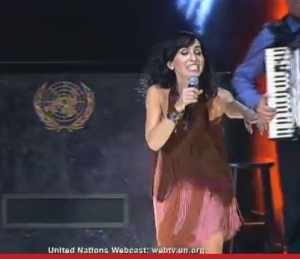 Rita at the United Nations

On March 5th at the United Nations in New York, Iranian-born Israeli singer Rita and her nine-piece band performed in Hebrew, English and Persian a concert titled Tunes for Peace. In the audience were UN Secretary General Ban Ki-moon, President of the UN General Assembly Vuk Jeremic, ambassadors, diplomats, and leaders of the US Jewish and Iranian communities.

Rita Yahah-Farouz has not reached this opportunity just because she’s Israeli but rather because Rita has always Persian heritage. Since 2011 Rita has managed to gain a growing fan base in Iran and with other Iranians living outside of their country. That’s right. An Israeli, singing in her native Farsi/Persian language, is growing in popularity with Iranians. Rita has used music as a tool that can build bridges and develop opportunities for greater dialogue where great tensions exist.

In the statement below President Jeremic says: “Great music makes up ground for communication, building bridges of understanding between even the most estranged of peoples.”

President Jeremic opened with this profound statement about music. Please start clip at 3:06

Since I believe what he said is so powerful I bring you the  the transcript as well:
“From the very dawn of civilization, music has been an indispensable part of human society.

In the Bible, its first reference appears in the Book of Genesis, where music-making is named as one of mankind’s three fundamental professions, together with herding and tool forging.

During the Exodus, it came to be associated with the quest for liberty and national emancipation, when the generation of Moses sang joyful songs of thanksgiving to the Almighty for having parted the Red Sea, rescuing them from the clutches of Pharaoh.

King David incorporated the use of music into his prayers and studies of the Torah. He also institutionalized it in the celebration of great events such as the arrival of the Arc of the Covenant to Jerusalem, and introduced it into the Temple’s liturgical services.

The voice of the cantor in synagogues around the world is a testament to this lasting bequest.

Music can not only bring individuals closer together, it can also help establish ties between nations.

At the New Year’s concert held this January in the General Assembly, the Secretary-General defined music as the world’s “universal language. It has the power to touch the hearts of all people,” he said,“

[reminding] us of our common humanity.”

Great music makes up ground for communication, building bridges of understanding between even the most estranged of peoples.

As illustrated by the career of tonight’s performer the world renowned Israeli-Iranian artist, Ms. Rita Yahan-Farouz music can indeed can cut across any boundary.

I share Rita’s hope that her latest album which celebrates the songs and rhythms of her native Iran can “puncture the wall of tension” between two great and proud nations.

Her music, which transcends the purely Persian or Sephardic, may very well be understood as a powerful entreaty for reconciliation a courageous attempt to establish a common sense of destiny between bitter rivals.

I believe we should consider tonight’s concert as an appeal for peace an imploration sung to both sides, for the acrimonious divide between Israel and Iran to be brought down.

Let us therefore be inspired by tonight’s performance, and help foster the requisite good-will that could, one day, bring to pass an era of amity in which the rattle of arms is heard no more, giving life at long last to the cherished dream of shalom, solh, peace.”

I wanted to bring a part of the concert where Rita shares a classical Persian poem recited by school children. Rita shares that this is something she was taught by her father who was an educator. Please start video at 47:49

Human beings are made from one living tissue. We are all parts of one being.
And if one part of the body hurts all other organs cannot be in peace.
Therefore if you don’t care about the pain of another people or of another person, you can’t be called a real human being.