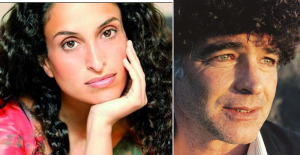 Meir Ariel was a profound Israeli song writer.  You can read more about him here.  Although he died in 1999, his message lives on through his penetrating lyrics. To learn more about his lyric writing you can read a great article by Yuval Ben Ami. However I want to focus only on the music and show you what can happen when a young and brilliant team of Achinoam Nini and Gil Dor take one of Meir Ariel’s songs to  an incredible place. Noa recorded Terminal Lominlat in 1997 when Meir Ariel was still with us. It’s important that I, Ariel Dagan, provide you the lyrics of this VERY disturbing song.

Since I am asking you to listen to two recordings, I think it’s fair that you would have some idea of what the music is trying to convey.

First, here is Meir Ariel’s original version he released in 1978. There is no need to listen to the entire 5 minute song. Noa and Gil’s version is after the lyrics:

When I was released, the doctors suggested
that I pay the airport a monthly visit.
I really do like to watch a big plane
take off through a transparent teardrop.
Afterwards the pressure on the washed eye is lighter.

I pick a positive afternoon, go to the port
on the way I tell myself: we’ll have to be rehabilitated from this too.
Myself tells me as we arrive:
so lets start training every day.

The doors guess me and open for me of their own,
I walk in slowly with plenty of ceremony in the butt
And all of the intercontinentality tickles me here and here
and here.

Taking myself to the bathroom to calm down
stealing a look at the mirror, I see a crazy man.
There are plenty of chicks like Terminal.

There she is standing arched,
two hand grenades, huge earring, shortening hair
Like some suspicious object next to the Swissair counter.
The security guard gives her a penetrating stare.

I run to the departures board to find me a outbound flight
There one to Zurich via Rome in one hour
Polite loudspeakers give me an urging notice
Here in my side I suddenly feel like a disturbance
A resolution is being squeezed out of me –
I love you Terminal Bella Mia!

I run back Swissair-bound not to miss Terminal
Chicks like her – just flip through any magazine
But she’s no longer there,
same with the security officer.
Polite loudspeaker – their tone’s now a bit more firm,
I have to go up and observe.
Here in my side it gets worse all the time
Nearly breathless I bump into the railing
a huge sunset’s light blinds me
A Swissair Boeing glides down, stops and waits.

Here in my side the pressure is relieved
Suddenly the evening sky is lit by an explosion
Down in the field – commotion begins.

When I was released, the doctors suggested
that I pay the airport a monthly visit.
I really do like to watch a big plane
take off through a transparent teardrop.
Afterwards the pressure on the washed eye is lighter.

Indeed, myself says to me
We have found a remedy.

Now for the amazing work of Gil Dor and Noa Nini. You really need to understand the lyrics to completely appreciate the new levels she has brought to this well know Israeli song. I love what starts happening at 2:59