All my bags are packed

All my bags are packed 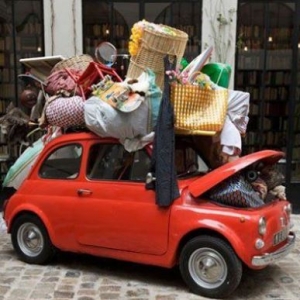 It’s always a sad and happy moment when your child leaves the house they have called for many years their home. Let me quickly say that my younger daughter is not leaving for good, but just the feeling is still as strong.

Last year after I dropped her off at the university, her new home, I felt very excited for her. I knew, as millions of other parents, that she was starting a great adventure. It’s important to note that my older daughter has just graduated college this summer and therefore this is not the first time I am experiencing these waves of emotion. Never the less, last year after dropping her off and returning to the house, I myself started on an experience that was brand new for me.

Now, in my mid 40’s I’m an empty nester! Let the party begin, I thought.  Well truthfully, it’s been sometime now that she’s been very independent, as many other teens, since receiving her driver’s license.  But still, she was returning home at some point in the day and when she did, I could stop worrying as most parents do.   Now I have to admit, I never understood why my mother was still up at 2:30 in the morning when I, as a teenager living in Jerusalem would return in the late hour. I would always say to her “why are awake?” and she would reply, ” I was just worried” I would laugh and tell her there was nothing to worry about. Now nearly 30 years later I’m laughing at myself for  doing and feeling as my mother did. I guess that’s just part of  being a being a parent.

I just went upstairs to suggest that she come and eat something. But she insists that she’s not hungry and I try to offer to help but she’s nearly done. When I see all her bags packed I am reminded of the John Denver song. Even though she will only be less than two hours drive from home, I can’t be certain that this is where she will always be headed at each school break. Kids develop friendships and often make plans to visit in other destinations. Still I know that when I picked her up last year at different occasions she was always thrilled to back back home.

So on my way back from dropping her off tomorrow I will reminisce with John Denver playing on Pandora  on my drive back to Worcester, MA. Here is a blast from the past- John Denver with Cass Elliot. She is the person who wrote this well known song. The song itself being at 1.34 into the clip. They start off talking about the importance of voter registration prior  to the song.