Speaking up for those who are silenced

Speaking up for those who are silenced 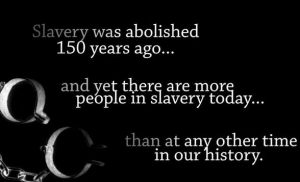 Just recently I wrote a post on my Blogger account. In it I explained  why I can’t stay silent about the current state of Modern-day Slavery in the world. I related my feeling directly to this time of year and to my upbringing and belonging to a faith based community. In fact, even in another post I shared my concern about the fact that not enough people are rising up to speak for those who are silenced.

Not For Sale, the organization I choose to support by donating my time and skills has a simple mission: Create a world where no one is for sale. You may say that this is a lofty goal but not I. In a Google + community on Education Revolution I had this exchange with another person.

On August 17 I, Ariel Dagan of  Worcester, MA posted in that community:

I wanted to reach out and see if anyone would be interested to help educate others. Human trafficking is a $32 billion industry? You can help make a difference. Please read, spread the word and offer additional ideas to stop this. http://bit.ly/14Rw5A0#humanrights     #moderndayslavery    #humantraffickingawareness   #excellenceineducation    #notforsale

A few hours later I received a comment from (user name left out) that read:

As long as there are people who can be forced to work for a bowl of rice just to keep from starving, there will always be slavery. To stop slavery, the one who is to become a slave must refuse. I know that this will cause for many to die, but if a service can be denied, then the service becomes obsolete. And as for americans, who use illegals, to work for less than minimum wage, are themselves slavers.

So I, Ariel Dagan of  Worcester replied:

I like your comment (user name left out) I quote what you wrote :” And as for americans, who use illegals, to work for less than minimum wage, are themselves slavers.” I do however need to inform you that walking away from pimps, factories here in the USA and around the world is very difficult. I highly suggest  that you watch the video link with the word facts in the blog post or another blog post where you can see what Kate Keisel and others in Polaris Project are saying.  (user name left out), we have the power to change the situation by raising awareness, organizing and causing change to come by the power of the people. It was 50 years ago this week that 250,000 people moved things through the march on Washington. On social networks we can reach and influence  millions to change their buying habits as well force companies to stop using modern slaves to sell us goods and services annually that profit them over $30 billion world wide.

+Ariel Dagan Stop buying diamonds and if you believe in the diamond exchange only dealing with politically correct diamond mines, well.
And for the girls who get taken, for mid eastern men who don’t want to get caught, good luck going up against that kind of money. Slavery ain’t going away. I am sorry but it has been with us from the begining, and it will be here until the end.

So I, Ariel Dagan replied:

While you are free to suggest a defeated attitude (user name left out), I will take the side that shows that throughout history we see many people who have challenged and done what many have said could not be changed. We see it in many areas of our life. If I can give you three examples with your permission: 1) Ghandi proved that regime change is possible without shedding blood. 2) Jonas Salk proved that eradicating a worldwide disease is possible 3) Dr. King held to his dream he told us about 50 years ago this week. Today the POTUS is a living proof of the change we have made.. (user name left out), one of the  most powerful tools that an educator holds in mind is the ability to inspire and light the flame of curiosity in the learner he/she touches. They make changes such as technological and agricultural devices that have fed and helped  tens of millions climb out of poverty and starvation. It all begins with the action of one.

In the Paul Simon and Art Garfunkel song: Sounds of Silence the lyrics read:

We must not remain silent about Human Trafficking for like a cancer it is growing out of out of control.

Only through education we can change current attitudes that as a society we seem to accept.

We must offer to lend a hand because the victims can not rise up by themselves.